3 THINGS TO KNOW IN THE WAKE OF HURRICANE IDA

By Annelise TappeSeptember 2, 2021No Comments

1) We highlight 3 things to keep in mind as we reflect on Hurricane Ida.

With winds hitting landfall at 150 mph, Hurricane Ida was one of the Top 5 most intense storms to ever hit the US mainland. While fortunately not one of the deadliest – in part due to the enormous protections built since Hurricane Katrina rocked New Orleans & southern Louisiana 16 years ago to the day – it was still highly destructive. 1 million folks in Louisiana are without power and hospitals, already overrun from the COVID Delta spike, are beyond capacity.

As Ida continues to bring major rainfall in it’s climb up the Mid-Atlantic coast, 3 key things stand out to us about this storm and what we can do to help mitigate damaged, displaced, and lost lives going forward.

Before getting into that, our thoughts and prayers are with all those hurt by this storm. If you can, here is a link to The Red Cross if you are able to make a contribution.

What climate science is proving out is that hurricanes are not necessarily more frequent due to global warming, but they are wetter, more intense, and forming more rapidly.

That last point is the real cause for concern. Hurricane Ida took only 60 hours to go from an official tropical storm to hitting landfall. It went from 85 mph to 150 mph in one day. All analysts say at best, major cities need at least 72 hours to evacuate. Making this a really shitty math problem.

This is not new. Hurricane Michael in 2018 in Florida was a weak tropical storm that didn’t seem like a threat just 48 hours before hitting landfall as a hurricane. Hurricane Harvey did the same thing in 2017, leaving Houston unprepared and suffering from record flooding that folks are still recovering from today.

The reason is twofold. Deeper, warmer ocean currents are creating more energy for storms. Since we can only measure surface temperature via satellites, we don’t know how deep those warm currents go and thus can’t predict their impact. In addition, a warmer atmosphere contains more water vapor. Since the mid 1990s, there is 4% more water vapor in the atmosphere. Both of these phenomenon, due to a warming planet, add more fuel to these storms in ways we can’t easily account for and predict.

We need to completely overhaul our emergency alert & evacuation systems. These were designed decades ago when storms didn’t change this rapidly. In addition, we need to invest more resources in measuring those deeper warm ocean currents to see when they are on a collision course with a storm.

Congress has been battling all year over Infrastructure spending. How large it should be. What classifies as infrastructure. It’s been a political battleground to say the least.

Clearly infrastructure investment paid off in New Orleans. The good news from this week is that the levees held. That has gone a long way in mitigating some of the damage and saving lives. That’s not to say some smaller towns are not devastated and flooded and sadly lives have been lost and millions impacted, but the fallout so far looks nothing like Katrina despite the storm being of similar intensity.

The investment the state and federal government spent in reinforcing protections after Katrina totaled just $14.5 billion

It’s too early to calculate the total damages from Ida, but there is no reason to believe so far it’s going to be anywhere near the $146.5 billion gap above. That means these investments pay off in the long run. So let’s keep making them.

Our electric grid and transmission lines need the largest overhaul it seems. Loss of power is the largest issue folks in Louisiana are facing right now. We saw this happen in Texas in February as well with the unexpected freeze. But so is investing in clean energy to lower emissions. We need both short-term resilience funding AND long-term emissions reduction funding. This is not a game of either ore like some pundits like to put it.

As for the concern over spending and the national debt? Hogwash. Our national debt is so absurdly large its borderline a fictitious figure at this point. But even if you are a frugal debt champion, look at the math in Louisiana. The financial damages capable from these increasingly intense storms will far exceed what we spend on both short and long term infrastructure as counter-measures. We need both. Spend the damn money.

Our third and final takeaway is a bit foreboding.

Redfin recently came out with a population report that shows over the last 4 years, the 50 US counties most at-risk for fires, floods, droughts, heat waves, and storms are all increasing in population.

Meanwhile the 50 US counties least at-risk for extreme weather are all decreasing in population.

Because these higher risk areas are more affordable, come with lower taxes, and have more housing options.

In fact, 40 out of the 50 of the highest risk counties currently have a median home price below the national level.

The wealthier folks in this country are essentially pricing out the safer areas and forcing more of the working class and middle class into higher risk areas.

Again, we have disproportionate negative impact from climate change on those who are socioeconomically most vulnerable. We need to recognize and do something about this. We need to look for ways to subsidize and control home prices in lower-risk areas regardless of how this impacts the investment returns of those who are already wealthy. How an Unrecognized Country is Solving Cheetah Trafficking

Cheetah are one of the most heavily trafficked wild cat species in the world. They are smaller and far less aggressive towards humans compared to larger wild cats such as tigers or panthers. Their presence as a pet has been a sign of royalty and prestige dating back to the ancient Egyptians to the Renaissance to famous Josephine Baker in the 1930s to today primarily in the Middle East and Gulf states splattered across Instagram, a platform that refuses to respond to requests from Cheetah conservations all over the world begging them to take this content down.

Those sales are primarily going to the uber wealthy in Gulf states such as Saudi Arabia, the United Arab Emirates, Kuwait, and Qatar. All via way of Yemen. And sitting across from Yemen on the Horn of Africa is the primary export location where smugglers are moving cheetahs from Africa into the Middle East….the country of Somaliland. Somaliland is a completely different country with it’s own governing system, laws, trade, and culture from the commonly known Somalia. However, the rest of the world ranging from the US to the UN to the African Union doesn’t recognize it. This is not exactly a China-Taiwan type situation either. Somalia is no global economic power and it seems Somalia also doesn’t mind recognizing Somaliland as it’s own place.

Somaliland is extremely poor – in fact the 4th poorest nation in the world by GDP per capita – but unlike Somalia, a highly functioning democracy. It’s capital city of Hargeisa is extremely safe and the Somaliland government has been prioritizing environmental protections as a way to kind of raise their hand to the international community that they should get recognition and independent trade and financial aid.

Enter Shukri Haji Ismail Mohamoud, Somaliland’s Minister of Environment, who is cracking down on the cheetah trade as a beacon of these efforts and doing so with abject determination.

There are three primary threats to cheetahs that have them as a CITES Appendix I endangered species:

They are all highly correlated. Cheetah need a massive range to survive. They can’t hunt easily out in the open as larger predators like lions will quickly chase them off of their kills. So they need a wide range to find pockets of hunting privacy if you will. As that range shrinks, cheetahs are then forced to prey near farmlands and can take out goats, sheep, and hogs. And they often get shot and killed in retaliation.

This then feeds into part of the illegal trade. You see female cheetah live in solidarity, whereas only the males form coalitions. A female cheetah needs 18-22 months to teach her cubs how to hunt, sometimes even longer, so if an adult female is killed in retaliation – usually the case since they are hunting on their own and desperate with cubs to feed – a local can follow the trail back to the den and take the cubs. Since they can’t survive on their own at that point – they can pass through many international trade loopholes as “conservation”. This then feeds folks directly kidnapping cheetah from the wild and passing it off as just another conservation claim to move it through Africa and into Somaliland to move to the Gulf.

This is not just tragic for cheetahs but also for their ecosystems. Cheetahs like all apex predators are key for managing prey populations and eradicating disease, since they feed on the weak and diseased of any prey group first. Cheetahs also hunt baboons, and studies have shown when baboon populations grow too large they come into contact more with humans and this can lead to passing on disease to us.

Late last year, Shukri Haji Ismali Mohamoud successfully took down Somaliland’s most notorious cheetah smuggler, Cabdi Xayawaan. He was sentenced to 4 years in prison, a record for an environmental crime in Somaliland since the country passed its Forestry and Wildlife Conservation Law in 2015.

Details of the case are here from National Geographic.

Since taking down Cabdi, cheetah trafficking is down by as much as 40% from many estimates so far in 2021. This is starting to have the effect Somaliland had hoped for – more chatter about its international recognition. If that move happens, they would have access to more aid and funds to further crack down on wildlife trade and environmental protections even more.

It’s inspiring in a way to see fates of cheetah and Somaliland independence linked in this way. Here’s to celebrating their historic accomplishment in 2020 and here’s to Somaliland’s Minister of Environment Shukri! 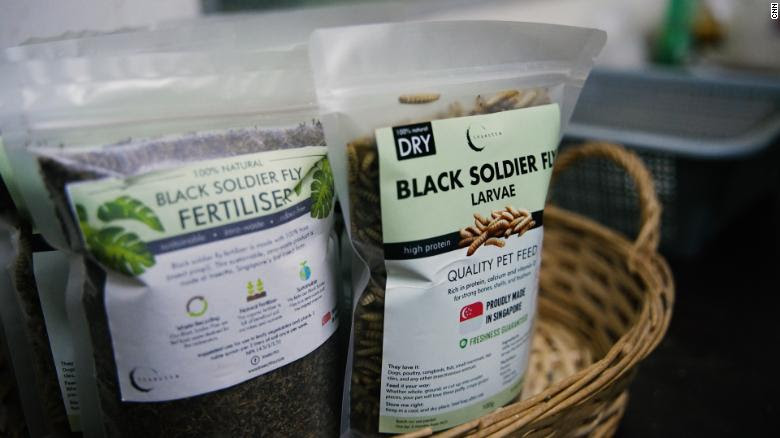 A new company in Singapore called Insectta has introduced a novel solution to the countries food waste issue….black soldier flies.

Instead of routing food waste to landfills, they are feeding it to fly larva, or maggots. From there, the excrement from the maggots is used as agricultural fertilizer. Some of the maggots are flash dried to be used as animal feed, and others are allowed to cocoon to reach their next phase as black soldier flies.

Those cocoons are valuable as well. Insectta has found a way to extract key biomaterials from them, such as chitosan, an antimicrobial substance that is being used for example to line facemarks to protect from germs. Chitosan from fly cocoons is far more sustainable than it’s current source – crab shells.

Here’s a video overview about Insectta:

Insect consumption has been practiced by people all over the world for as long as we’ve been around. However, larger scale insect farming is relatively new and growing. With it, a debate over it’s ethics.

There are opponents who warn against large scale insect farming:

Here is a well-researched piece highlighting some of the potential perils of large scale insect farming.