Dolphins are a favorite of many. Their playful mannerisms and extensive intelligence also make them a popular and exciting area of study for many researchers. We already know that dolphins live in complex social groups and have highly-developed brains, and also that they have demonstrated self-awareness, empathy and problem solving before. So yeah, what’s not to love?

All the Bells and Whistles

And now, a groundbreaking new study has revealed that they also learn each other’s names…. well, the dolphin equivalent of what we would think of as names: unique, one-of-a-kind whistles!

Let’s break this down: According to the new study, when dolphins are attempting to capture and defend females in heat, they will actually seek help from their buddies and form teams. They are able to identify said buddies by their individual whistles, remembering who has been consistent and cooperative allies in the past. When these teammates hear each-others whistles, they respond ready to help.

When male dolphins practice this cooperation, they can do so in groups of two to three, or “a first order alliance”. A larger group of cooperative dolphins is called a second order alliance and can consist of as many as 14 dolphins. In both these groups, they work together to find and corral fertile females and defend against rival groups who are attempting to corral the female themselves. Some second order alliances will even join together to form a third order alliance, which in turn provides the males with an even better shot at rounding up allies should they need them for a rival attack. 1 dolphin= adorable. 28 dolphins= terrifying.

The researchers found that dolphins in their first order alliances will often switch partners, while those in the second order groups will tend to stay in it for decades. These groups are considered the core of the males society and will stay together for as long as 40 years, or their lifetime.The males are able to keep track of each other in such big alliances and after all that time by recognizing each other’s unique signature whistle which it keeps for life. So when it calls for help, those in it’s alliance recognize them and know to come, almost as if they were calling their name.

To test these dynamics and theories, the researchers placed a speaker underwater through which they would play the whistles of males to other males in their various alliances.

The lead author of the study explained, “In 90% of experiments, dolphins who heard whistles of second-order alliance members turned immediately and directly toward the speaker.” The findings, she says, suggest dolphins—like humans—have a “social concept of team membership, based on an individual’s previous cooperative investment, rather than how good friends they are.”

Dolphins (and nature) continue to amaze us, as i’m sure they do you! Next time you see one jumping through the waves at sunset, make sure you boast your signature whistle to get their attention. 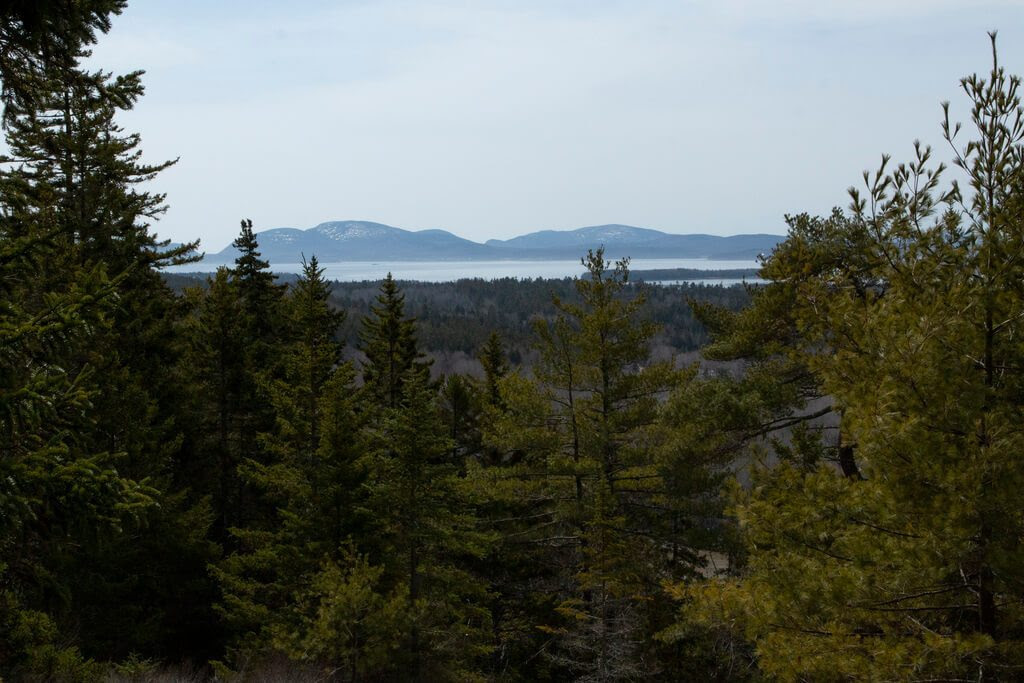 The other day, we noticed a clip on YouTube were the overgrown, extreme right wing Cabbage Patch that is Tucker Carlson was speaking out against an energy project in Maine because of the damage it would cause to the local forest, wildlife, and wetlands. You can imagine our curiosity, as on face value this seemed like the most anti-Tucker Carlson of things, so we looked into it….

What we found is a very divisive, polarizing issue going on right now in Maine that proves just how challenging it is to align people on consistent messaging around climate change and how easy it is to spin information on both sides of issues.

To briefly summarize, in June of 2018 a group of electricity companies in Massachusetts agreed to a big, billion dollar + commitment to buy electricity from Hydro-Quebec, a renewable energy company in Canada, and Central Maine Power, Maine’s largest utility company that would build the transmission lines to get it there, seeing as Maine is sitting squarely in between Hydro-Quebec and eastern Massachusetts.

Massachusetts is trying to meet its targets for renewable energy, and this supply from Hydro-Quebec will go a long way in getting there. Hydro-Quebec provides hydro, wind, and solar power, although this deal is primarily for hydro with the other two sources as backups.

In order to get this power there, CMP has to build a 145-mile transmission line. 53 of those miles have to be cleared nearby the Boundary Mountains, and would involve cutting through dense forest, wetlands, and habitat for wildlife such as the white-tailed deer and brook trout.

So in order to get new clean energy to Massachusetts, from a Canadien energy company, CMP has to cut through forest habitat in Maine. Sheesh. This has political turmoil all over it.

Main opponents have gathered over 100,000 signatures to stand against this deal. Here are their main arguments:

On the surface these seem legit and concerning. But let’s dig in a little more:

Expect a lot more of these very polarizing, complex deals in clean energy to continue. But there is a lot of spin and propaganda as well.CMP and HQ need to publish a comprehensive study on the greenhouse gas emissions over 5,10 and 30 year horizons. However this feels like Mainers are mostly upset they are not getting the economic upside of the deal, even though jobs will be created for building the transmission lines.

Here is an article describing the issue if you want to read deeper.

Nestle Ordered to Stop Pumping So Much California Water

As the climate crisis grows more pressing, Californians among other Americans, are becoming all too familiar with the annual wildfires, dry-seasons and droughts. These droughts are declared after a year of extremely low rain levels, where dams end the wet season less than half full, and the public becomes concerned about water usage and its rationing.

In response to Governor Gavin Newsom’s declaration of a regional drought emergency, California water officials made recent headlines when they officially moved to halt Nestle from siphoning millions of gallons from California’s San Bernardino forest. This is where it bottles its water and sells it under the Arrowhead brand name. So far, this cease-and-desist draft order needs to be approved by the California Water Resources Control Board, however if approved would be momentous, as Nestle has been accused for years of draining water supplies at the expense of local communities and ecosystems.

The world of water is tricky, as these corporations own rights to certain water sources with agreements dating back hundreds of years. In this case, Nestle maintains that their rights to California spring water dates back to 1865, and are thus within their rights to continue pumping. On the other hand, a 2017 investigation found that Nestle was siphoning way more water than legally allowed- we’re talking millions of gallons (they drew 58m gallons, while only being allowed to validly claim 2.3m gallons). That’s 25 times more water than they have a right to. For BOTTLED WATER, a huge conservation issue. Is your blood boiling too? Just us?

So it comes as no surprise that amid yet another California drought and the second dry year in a row, many are fed up with the mega-corporation’s exploitation of local resources. State officials have sent Nestle the letter notifying them of the draft order, and they now have 20 days to appeal and ask for a hearing.

Nestle’s history of mass pumping has not only taken far more than its fair share on taxpayers’ dime, but has also damaged many of the local ecosystems around it. These watersheds are home to deer, fox, mountain lions and many other species that are suffering from the over-siphoning of their resources.

If the state water board approves the cease-and-desist order against BlueTriton (Nestle Waters rebranded title), they could face fines of up to $1,000 a day, or up to $10,000 a day if a drought is declared in the area.

This is just one of many fights that California sees between it’s farmers, environmental groups, and cities, as drought conditions ravage on and the water supply remains limited. Allbirds Tells The World “We Pollute, Here’s the Evidence”

Last week Allbirds, the trendy eco-friendly shoe brand, welcomed in Earth Day with a provocative call to arms, so to speak, for the fashion industry to start putting accurate carbon footprint labels on its products.

They are of course starting with themselves. They built a Life Cycle Assessment tool, which you can access here. And now on each of their products, you can see the starting raw emissions score, such as this pair Tree Dasher Relays which run at a 8.9 kg CO2 per unit.

Allbirds is making their Life Cycle Assessment tool available to everyone in fashion, and calling for top brands to use it.

It’s great to see this, and really brilliant PR in time for Earth Day, but is Allbirds also doing a little spin of their own?

To be clear, there are other independent 3rd parties that will measure fashion brands carbon footprint. CDP is one of the largest and does this for a lot of folks.

It’s also worth pointing out that carbon emissions is not and should not be the only thing we focus on when it comes to environmental impact. Water usage for example is something that is a big problem in fashion, particularly in using dyes that can’t be cleanly recycled back into the system, that does not get a lot of coverage.

But perhaps the most disturbing of them all are the Offsets. The ugly duckling of the climate movement.

Allbirds, like so many others, reaches “Carbon Neutrality” or “Net Zero” by purchasing offsets to cancel out their emissions. Personally we are getting a bit tired of this trend. These offsets are often just money exchanging hands and put zero responsibility on the company creating emissions and profiting from them to ensure the offsets they are purchasing are actually seen through.

We need to keep striving towards true sustainability. Which is not producing emitted products and then buying your way out of their footprint. But actually created systems where make products by putting back into the earth what we takeout. Even better if we can give back more than we take out.

This is hard. It will take time and more innovation. And brands like Allbirds are certainly on the positive end of things. But offsets need to be recognized for what they are – a stop-gap solution we need to ween off of.