THE RETURN OF THE WOOLLY MAMMOTH

By Annelise TappeSeptember 16, 2021No Comments

1) Colossal announces a $15M fundraising round to accelerate their work in de-extinction, starting with the woolly mammoth

3) Allen Coral Atlas’ live, global monitoring system of our planet’s coral reefs is up and running

In major news this week, private firm Colossal announced a $15M fundraising round to accelerate their work in reviving extinct species, known as de-extinction, starting with the woolly mammoth. With the target of having the first calf successfully born within the next 6 years.

The announcement is stirring up all sorts of scientific communities around the ethical debate of reviving extinct species. In the famous quote from the film Jurassic Park, some scientists get so wrapped up on whether they could, that they fail to ask whether they should.

Well, for George Church, who has been on a crusade for decades to push de-extinction forward, he found his answer to those challenging the ethical debate: climate change.

The case being made by Church and his Colossal co-founder Ben Lamm, is that reviving the wooly mammoth will help maintain the Arctic permafrost which is thawing at alarming rates that can lead to a massive release of methane and carbon.

Permafrost is a deep layer of essentially frozen soil sitting below the surface throughout the Arctic. Its size is twice that of the United States. It holds over 1,600 gigaton of carbon. Some scientists claim that the permafrost is more susceptible to global warming because of the damp, mossy tundra sitting over it that does a poor job of cooling the ground.

Millions of years ago, these Arctic terrains had millions of miles of grassland. Large herbivores like woolly mammoths lived on those grasslands and maintained them, via knocked down trees to maximize sun exposure, turning over soil and providing fertilizer through their dung. As humans entered the picture some 10,000 years ago and hunted the mammoths and other large herbivores to extinction, the grasslands lost their partners in these creatures and over thousands of years withered away.

So as the story goes from Church and Colossal – bring back the mammoths to bring back the grasslands to protect the permafrost against global warming and mitigate the release of more methane and carbon.

To fulfill this plan, Colossal is working with Sergey Zimov, a scientists who for years has been preaching the need to return large herbivores to these areas and has already started doing so in what he calls Pleistocene Park, a small area of land where he has brought in bison, elk, and other herd animals. Zimov claims that Pleistocene Park’s soil temperature is 10 degrees cooler on an annual average the soil just around it only a few years into the experiment.

George Church is very much the gray haired scientist from Jurassic Park.

If you look at Colossal’s site, the mammoth is only the beginning of their de-extinction ambitions.

The methodology they are using is taking skin cells from modern Asian elephants, reprogramming them into stem cells, splicing those with mammoth DNA that has been uncovered from fossils, and genetically engineering an embryo that will gestate in likely an artificial womb, since getting approval to use an Asian elephant surrogate would be tough given their endangered classification.

There are many hurdles to cross here. Namely that while there have been small success in cloning and genetic editing, a mammal has never successfully fully gestated in an artificial womb. And that’s only a small percentage of the battle. Even if they can birth a calf in 6 years, it will take decades to reach a self-sustaining adult herd. Furthermore, to accomplish what they need on the climate change front in the Arctic, they would need tens of thousands of wooly mammoths across millions of miles of tundra.

It’s worth noting that non of Church’s research has ever been published in a scientific paper or peer reviewed. Something he claims will happen soon after this funding round.

Church’s team has also been editing pig genomes so they produce organs that can successfully be transplanted into humans, another highly questionable practice in the world of bioethics. This is true science fiction being brought to life. So intellectually it is stimulating, and of course, it would be really cool to see wooly mammoths roaming the Arctic once again and there may be legit climate benefits at play as well.

All that said, there is such a slippery slope here to bringing back extinct species and so many questions unanswered.  How will this type of work impact current species and ecosystems that have long evolved past the mammoth’s day?  What other factors contributed to the wooly mammoth evolving in the first place that are not here today and not being taken into consideration?  If we go down this road, where will it end?  How will it not be abused for profit and commercial interest?  Every single technology humans have ever created ends up being used for malice, do we really want this being such a tool?

There are many many many ways to address climate change that don’t require us to play God and bring back extinct species and engineer ecosystems in this way. 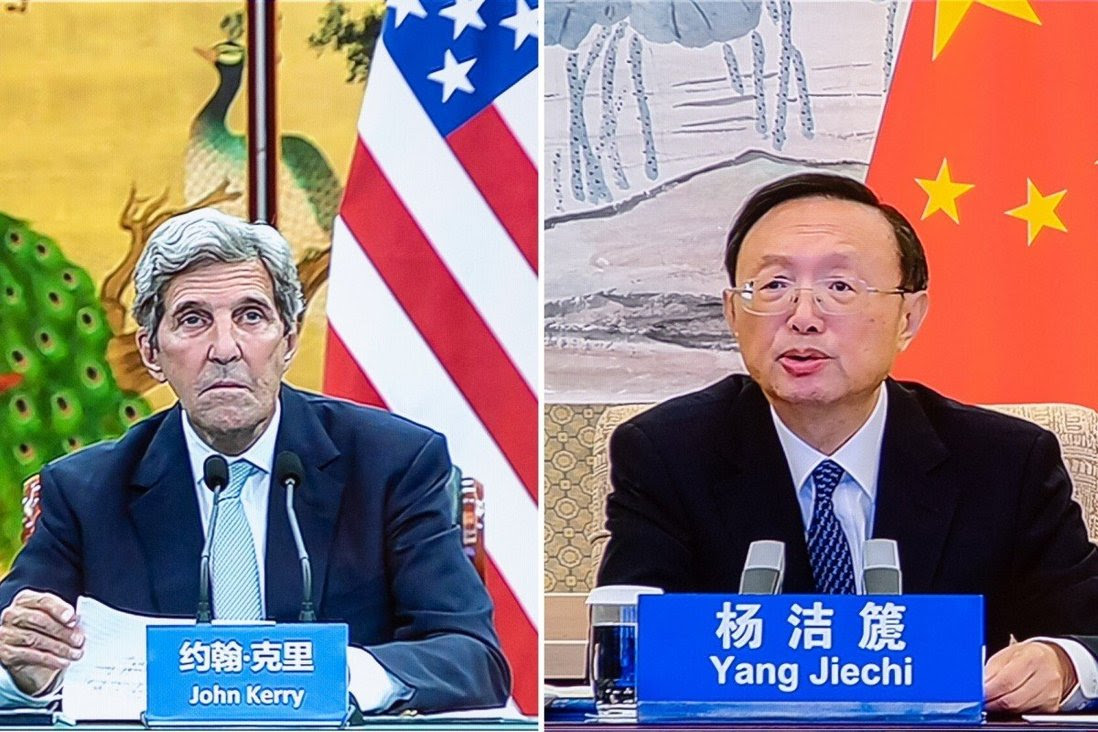 Last week, John Kerry, the US Climate Envoy for Joe Biden, had a less than stellar trip to Beijing.

Kerry was aiming to make some cooperation inroads ahead of the Global COP26 Climate Summit in November in Glasgow. Hoping to showcase a slew of commitments between the US and China around addressing the climate crisis that would be key in building some momentum going into that critical summit.

Kerry’s ambitions included getting alignment on the goals of the Paris Agreement to limit warming to 1.5C and peaking emissions by 2030, and a moratorium on coal-fired projects globally, something China has been investing in as part of their large One Belt One Road initiative to become the world’s dominant trading power.

Only, that didn’t happen. China essentially bitch slapped Kerry back to the US, telling him they have their own climate action initiatives and are not interested in the US’ involvement or input.

Looking back at something that happened a few months ago helps explain this response from China and point to how tricky of a situation this is….

China produces the overwhelming majority of the world’s solar panels. Including most in the US. Their cost efficiencies are unmatched, and one would think this is very much in line with Biden’sgoals to cut solar costs.

However there is a big challenge. 45% of the world’s polysilicon, the core component of modern solar panels, is made in the Xinjiang province in China. That is the western province where over 1 million ethnic minorities are suffering from oppression and cultural assimilation, highlighted by the plight of Uygher people. This has been well documented.

This summer, the Biden administration banned the imports of a few Xinjiang companies practicing forced labor of these minorities. Both in the solar space as well as in the magnet space used to make wind turbines. He threatened more sanctions on many more.

China of course denies these forced labor claims and ethnic cleansing. Here in the US, Republicans have used this to aid in their fight against renewable energies, citing that Democrats would need to accept the horrible human rights violations in China in order to feed their push off fossil fuels, that Democrats are choosing climate over human rights.

Now in China, they are rebuking Kerry’s attempts to collaborate on climate initiatives because of the US sanctions against their solar and wind providers, saying the US can not push China to move faster on climate action while at the same time sanctioning and banning renewable energy providers from China for false claims on human right violations.

WHAT. A. FREAKING. MESS.

There is no easy solution here. Absolutely and unequivocally we should stand for human rights and continue to push China to stop what is happening to Muslim minorities in Xinjiang. Although let’s be real, we continue to oppressive Native people here in the US, so we are not exactly Mother Theresa here.

At the same time, there is no possible way to address the climate crisis without China & the US working together. None. We are the two biggest polluters, two biggest superpowers, two biggest market movers, two biggest global financiers. Cop26 is critical to see progress and cooperation. If US & China relations continue to deteriorate, so will this planet.

Let’s hope cooler heads prevail at COP26 and progress is made.

Bold Women in Science: 15 Women in History You Should Know 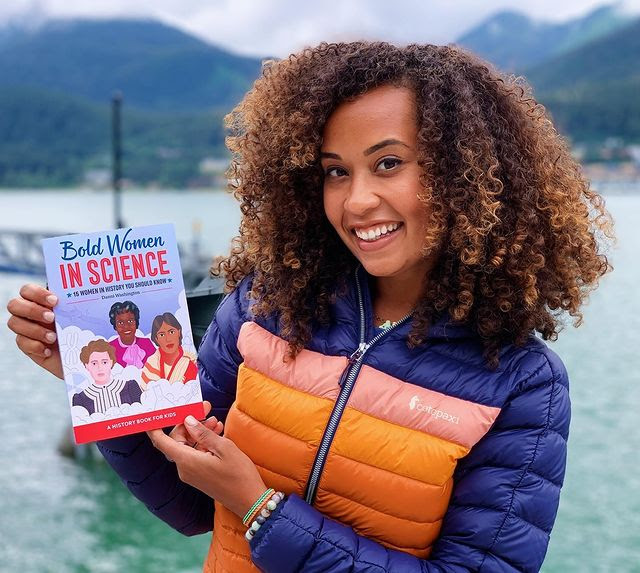 Yesterday, we went live with Danni Washington, TV host, Science Communicator, and dear friend to Animalia, to discuss her new book: Bold Women in Science. This collection of biographies for kids explores 15 of these women and their extraordinary accomplishments―even in the face of huge challenges. See how they bravely followed their dreams and revolutionized what we know about technology, our bodies, and even the universe! In some positive news, the first ever live, global monitoring system of our planet’s coral reefs is up and running. This is a huge breakthrough in conservation science and a big step in saving our planet’s coral.

Coral reefs are home to 25% of all marine life on earth. Yet at current trends, they could all be gone by 2050. This is due primarily to ocean warming and acidification, causing coral bleaching. Coral bleaching is a stress event that causes coral to expel out the algae they rely on for food, leading to their death.

There are many global initiatives underway to save coral. From growing healthy coral in nurseries to then restore back into the oceans, to limiting fishing and other commercial activity around coral to further reduce stress. However, these efforts are handcuffed by the research and real-time data available. Enter the Allen Coral Atlas.

95% of our oceans have still not been explored whatsoever. That’s not the only crazy stat on our still limited understanding of ocean ecosystems. We also are really only able to detect changes in ocean temperature and conditions on the surface due to the limitations of current satellite systems, making it hard for example to monitor real time changes in a storm like Hurricane Ida.

Coral is often located in more shallow, coastal waters, making it a great target for better real time monitoring using the tools we have. If we can identify what is happening in real time, we can better target recovery efforts, better understand negative drivers, and improve policy making.

After 4 years of research, the Allen Coral Atlas is up and running. You can check it out yourself here and use their tool.
There are a lot of really interesting applications already happening with this:

“We now have the highly detailed maps needed to create new spatial plans and marine protected areas,” said Wen Wen, a marine spatial analyst in Indonesia. “The Allen Coral Atlas is playing a large role in prioritizing 30 million hectares of a new MPA and providing alternative locations for a coastal economic development project of a shoreline airport. This tool is a blessing to our country.”

This is awesome and much needed. Big kudos to all the partners who have stepped up to make this happen

A major step forward in conservation is data and research, so share this big accomplishment with everyone you know!