The Story Behind Saudi Arabia’s $500 Billion “City of the Future”, Neom

Recently, the ambitious project in Saudi Arabia known as Neom came back into the limelight with fresh PR announcing their new project THE LINE and the formal beginning of infrastructure development starting in 2021. The “City of the Future” as those behind it claim promises to usher in a new era of sustainability and human success. But for who exactly is the question we’ll unpack in just a second.

This got us thinking it was time to do a piece about the future of city planning, which is pivotal to get right in our effort to live more harmoniously with the natural world.

This is a challenge given the global population is expected to rise to 9.7 billion people by 2050, up from 7.7 billion people today. Getting humans to live more densely in urban centers is also quite important to protect the natural ecosystems surrounding them. But how do we do this without pushing pollution and waste issues further in the red, or leaving so many people without their basic needs met with the wealth gaps already creating problems today – just take a scroll through San Francisco to see what we mean here.

What does the “City of the Future” actually look like?

Let’s start with Neom since it’s back in the news. We’re gonna try to be kind here as this is a project that looks promising and innovative at the surface level, but man oh man does it look anything but as you start to peel back the layers and see what’s inside. 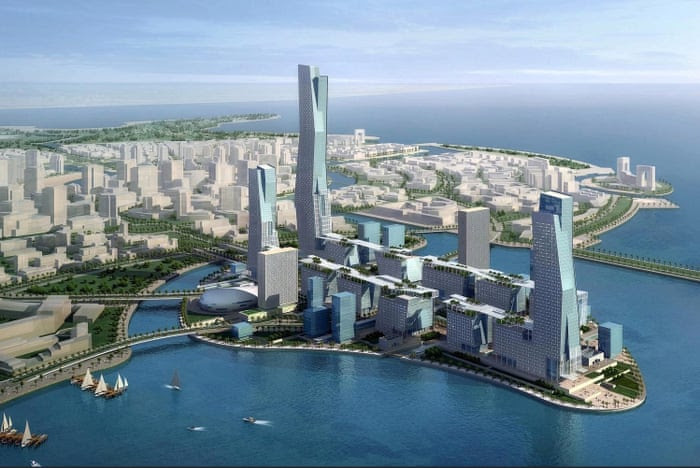 This project kicked off in 2017 as the ultimate passion project for Saudi Arabian Prince Mohammed bin Salman – also known as MBS. Yes, this is the same Prince who was behind the horrible assassination of journalist Jamal Khashoggi, and has a pension for bombing civilians in any cities in neighboring countries housing rebels he doesn’t like such as the Houthi in Yemen.

He also LOVES attention. He’s known for courting Silicon Valley elites such as Elon Musk. He made a $2B investment into Tesla a few years back and is working hard to make sure Elon returns the favor by building a Tesla factory in Neom. And he is very much into Neom.

MBS is planning on investing $500B to develop this city which will sit in the northern part of Saudi Arabia off the Gulf of Aqaba connecting to the Red Sea. In fact you can locate Neom on a Google Map already today if you just type it in.

This site was chosen because they say it will be reachable by 40% of the world’s population in under 4 hours via airline.

What they are promising with Neom certainly sounds good. And man do they do a wonderful job of fitting every key buzzword into their marketing materials. It’s like a MasterClass in PR.

Good question. There are absolutely no concrete details offered on their site or in much of their materials to date. Well, there are some in their 170 page white paper developed with McKinsey in 2017, but as you’ll soon see those are more disturbing than promising.

MBS promises ONLY 5-star Michelin restaurants and the highest GDP per capita in the world. So ugh, it doesn’t appear MBS is for anything but the uber rich and uber elite. There are absolutely zero details about the cost of living expectations, real estate prices, etc….we looked hard and far.

There are so many strange people from around the world with big fancy titles but they are not really saying anything. As an example, let us know if you can find any actual substance in this interview with Dr. Paul Marshall, Head of Environment for NEOM. Also side note, but this woman interviewing him is 100% cyborg. Maybe everyone involved outside of MBS is?

You Want Details? Be Careful What You Ask For

So yeah, some details did come out in a Wall Street Journal report we’ll link to below.

They include such things as:

They then backtracked a bit on the forcible relocation of local peoples to say that these local people will be given the opportunity to go through an immersive cultural education program to live within the expectations of people in NEOM. Yikes.

I mean, this looks more like a dystopian sci-fi movie than a roadmap for cities of the future.

And remind us, how is building a new city for the uber elite on currently natural and protected lands supposed to enhance nature? We call BS on project NEOM.

But if you want to determine for yourself, you can check out more here.

What Does R&B Singer Akon Think?

He thinks he might as well just build a futuristic city of his own!

That’s right, the singer behind smash hits like Smack That is officially building his own futuristic city in Senegal, his home country. Dubbed Akon City, it is a $6B project with $2B already raised and construction is set to begin in 2021 and finish by 2030.

The city will entirely run on Akoin – a cryptocurrency named after…well you get the theme here.

The city will also run on all renewable energy, mostly from solar provide by Akon Lighting Africa, an actual energy company founded by and named after….you guessed it….Akon!

Of course it’s going to have the tallest building in Senegal, called Akon Tower.

But once again, like Neom, there are far too little details on how this city is going to be so sustainable and be a model for others, and who it is for. There are 15.4 million people in Senegal today who live in poverty by UN standards, yet Akon says this city will be for the “more elite local Senegalese”. Once again, hard pass.

Where Is there Hope?

So if Neom and Akon City are not the models of the future, what is?

Let’s dig in to some ACTUAL interesting developments that may signs of things to come as we look towards the future of living. If you are familiar with Medellin, Colombia, you probably know about it’s charred past as the home of Pablo Escobar and the murder capital of the world in the 80s and 90s.

Oh, how times have changed. What has happened in the last decade in Medellin may actually be a critical development model of the future.

Like many major South American cities, Medellin has long had a big chunk of it’s population living in slums or shantytowns. In Brazil they may call these favelas for example. In developing nations, as many as 50-60% of populations can live in shantytowns.

Shantytowns are very much disconnected from the urban centers they are connected to. They are wrought with poverty, disorder, lack education and healthcare and public services. Medellin had no issue here 50 years ago, but with population growth from 350,000 to 3 million, shantytowns became a real problem for the last 20-30 years.

However, the city has done something remarkable. Rather than keeping shantytowns disconnected from the urban centers to try and minimize crime and disorder from creeping into other parts of town, they did the opposite. They connected them!

The big move was the creation of cable cards that connected the urban center to the shantytowns and made passage back and forth very easy and cheap. This allowed easy commuting, and very green commuting as well, for the cable cars have an extremely low carbon footprint compared to cards or buses or rail and less capital as well.

This savings on capital vs. alternative forms of transportation then allowed them to build schools, libraries, and microcredit services.

The result? More people being lifted out of poverty without building new developments or massive handouts. Just empowering people with access and education.

Given that the majority of the world’s population growth in next 30 years will come from cities in developing nations, this is an in important model.

There was a great piece in National Geographic where they tapped architectural and urban planning firm Skidmore, Owings and Merrill to design a city of the future.

You should check it out for yourself, but here are some fun highlights:

If you have not recently been to Singapore, well once COVID vaccinations are widespread and travel is back, book yourself a trip.

Singapore continues to impress us with how quickly it is adapting to a more sustainable future. Singapore is home to 5.7 million people and has also been successfully managing population growth to a now more manageable 1% growth down from 5% just 15 years ago.

So let’s look at some of great stuff Singapore is doing. Singapore is already adding greenery in creative ways via the inside and outside of their city structures. They’ve already seen this provide cooling effects in an otherwise very hot part of the world. Biodiversity has rebounded, and they are seeing positive community effects with urban gardening and mental health benefits of having green places to relax.

Moving to fully renewable energy on their own would not be possible for Singapore. Yes they have pushed into solar via their city structures, but it won’t provide nearly enough energy, and Singapore lacks any of its own surrounding wide-open landscapes for harvesting wind or geothermal energy.

Instead, they have been building trading pacts with neighboring countries like Indonesia and Malaysia specifically for connecting their grid to only renewable energy sources.

This provides an interesting roadmap as well to explore in the future – if the majority of the population in the world moves to denser, urban areas we can restore ownership and control of the wild ecosystems that surround it to native, indigenous peoples who know how to care for the land and the renewable energies they can provide and support can be enough to meet their economic needs without needing to mine and harvest and exploit those lands for fossil fuels or natural gas.

Retooling Education Around Upskilling and Respelling

Singapore has poured a ton of resources into improving it’s local education system. But this is not just constrained to child development or top notch universities.

They have investing in programs to quickly re-skill workers around changes in jobs and systems for a more sustainable future, both based on advancements in AI & needs for sustainability.

There is now a year round system to allow for teachers to take “education breaks” to keep learning and adapting to all on the country’s dime.

They have also taken steps to take the academic competition component out of education and personalize the needs for each individual student and help them identity the trades that would most fit them and develop them for success accordingly.

The First to Cell-Based Meats In December of last year, Singapore became the first country in the world to approve the pubic rollout of a cell-based meat. In this case, chicken nuggets from the company JUST (you may have had their amazing plant-based eggs) that will rollout in restaurants in Singapore this year.

Cell-based meats use immortalized stem cells from animals and then allow these cells to natural diffuse in a cultured medium and then are scaffolded to adhere in it’s natural form via a bioreactor. The result? A perfectly normal and biologically sound piece of meat that is the exact same you would get from killing livestock in terms of molecular structure, nutrition, and taste but without ever having to kill anything.

Cell-based meats may be our way out of the horrors of the meat industry today that is responsible for over 10% of greenhouse gases.

While many countries around the world including the US are fostering the R&D of this work they are a long way of approving it for public use. Singapore decided to fast-track that this year, which may provide a critical case study for others to do the same.

BTW – if you want to learn more about cell-based meats you can listen to our podcast episode with Finless Foods founder Mike Selden.