The Lowdown on Biden’s Infrastructure Plan

It’s been one week since Biden announced the details of one of his larger campaign promises – a $2 trillion+ plan for Clean Energy and Infrastructure.

As you can imagine, it’s causing a lot of stir. Particularly amongst conservatives who not only disagree with the allocation, but also how Biden plans on paying for it.

There you have it, the broad strokes

So, What is Infrastructure?

Much of the debate here rests on defining infrastructure.

Critics looking for poppy sound bits say only 5 to 7% (roads and bridges) is being spent on true “Infrastructure” so Biden’s plan is a bit of a bait and switch in their minds.

But that’s hogwash. In the modern world of course things like broadband internet and the electric grid and our water pipes are things that should classify as infrastructure.

And so is energy. It’s the backbone of everything we do and Biden is delivering on his promise here to spur clean energy – from nuclear to electric cars to direct air carbon capture.

Finally, Biden is recognizing here that the working class of people are themselves infrastructure. He’s particularly standing up programs for the working class here saying we need to invest in them and their jobs as they are the foundation of this country. They do the majority of spending. They are on our front line. They are teaching our kids. They are taking care of the sick. And that makes sense to us.

So while there are certainly some aspects of this bill that you could say are not traditional infrastructure, we like the expanded definition.

So how much of this bill technically classifies as “Green” or “Climate-Friendly” investment?

There is a fantastic breakdown on this by the World Resource Institute you should check out here. Below are two great graphics from the story that sum it up. 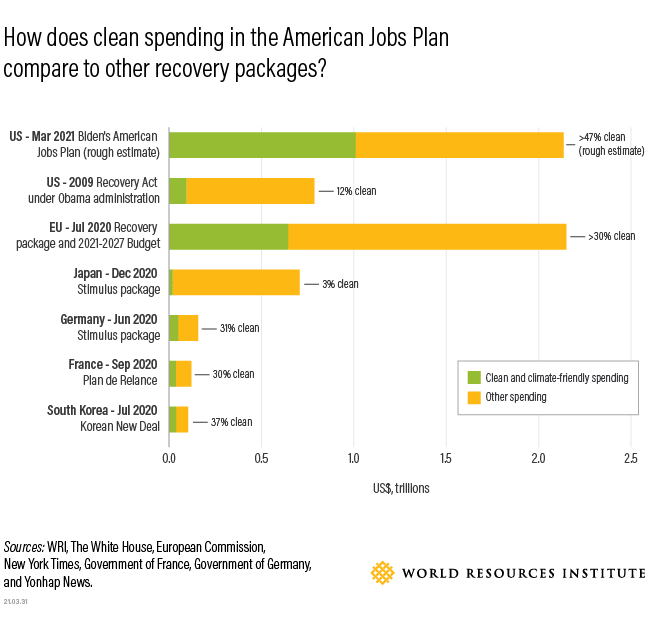 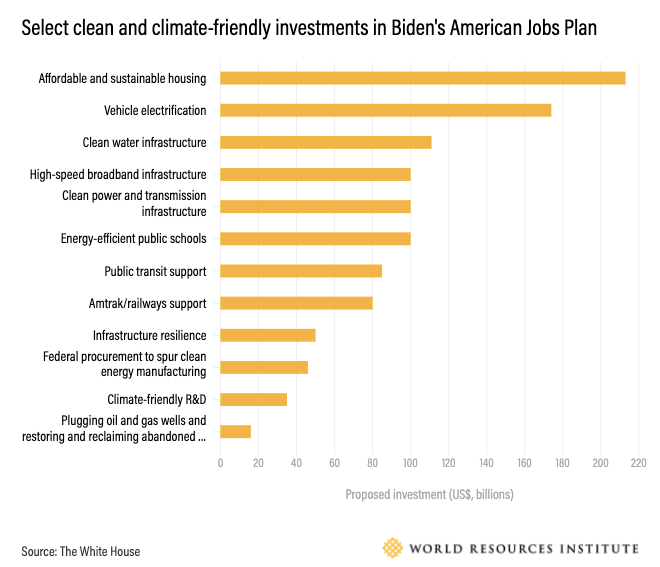 $2 trillion is a lot of money, so who is paying for it?

The Biden Administration is targeting two main sources of funding

Conservatives really take issue here. They hate taxes. They want rich corporations to continue to reap all the benefits. Their argument is these higher taxes will result in higher costs passed onto consumers. But that theory is foregoing a pretty critical aspect of economics. Namely competitive pricing. If you raise your prices that is an opportunity for a competitor to lower theirs and take your share. This does not work as well in areas of pure monopoly – namely Silicon Valley & Public Utilities – but then again, we shouldn’t have any monopolized industries in the first place.

Biden has said to all conservatives, “show me a better way to pay for this bill and I’ll consider it.” And some, like Mitt Romney, have come forward with proposals of a carbon tax instead, something we are a fan of and would welcome as part of the funding sources.

So that is the American Rescue Plan and American Jobs Plan now rolled out. The 3rd and final big bill Biden is pushing through soon will be the American Family Plan, where you can expect even more taxes coming on American’s wealthy class. 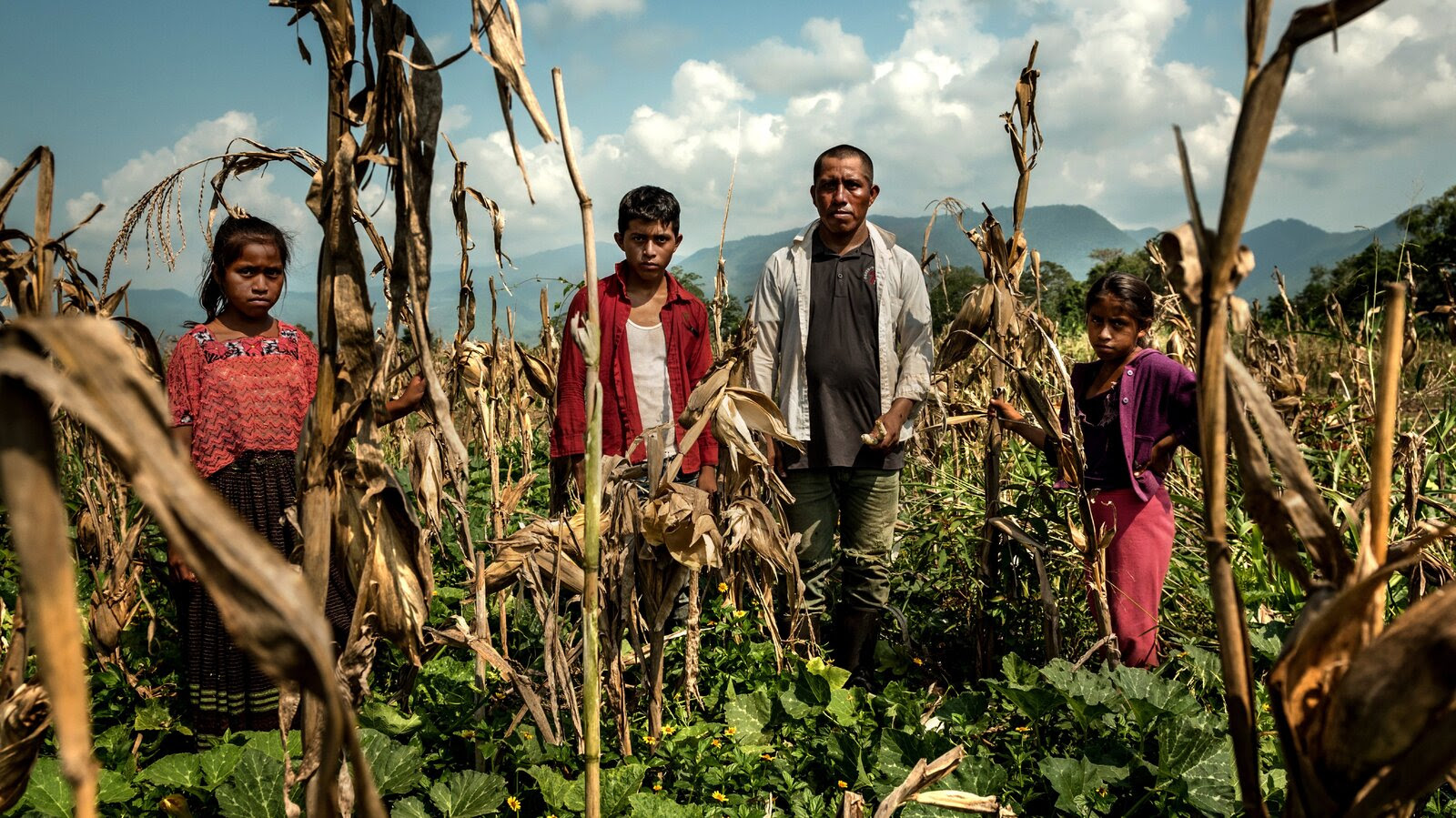 The Migrant Crisis is Driven by the Climate Crisis

For weeks on end, the news has been dominated by what is happening on our Southern border and the surge in migrants crossing over and seeking a better life. Even for the most steadfast supporters of immigration and the positive impacts it has on our economy – Animalia being one of them – the sheer volume right now is a bit untenable, resulting in poor temporary housing conditions and political turmoil.

Now some folks are squarely putting this on Joe Biden and his relaxation of some border control policies. Others say this was waiting to happen post pandemic since we had a big surge in 2019 and the pandemic stalled it in 2020, leading to a build up.

Yet, digging into the details, the biggest culprit here seems to be the Climate Crisis.

This encompasses Guatemala, Honduras, and El Salvador – the three nations that are driving the biggest of the migrant movements.

So why might so many folks be fleeing these countries? Traditional “refugee” definition will say this is either due to inner conflict such as wars or political turmoil. However, it might actually be climate change.

These three countries in particular have seen a terrible combination of droughts and hurricanes. The dry areas have seen as much as 40% less rainfall and 10 consecutive years of increased droughts. For countries where a majority of people work in agriculture, this has devastinging effects.

In the wet airs, they are being ravaged by hurricanes. Just the two latest storms – Hurricanes Eta & Iota – damaged or destroyed 1200 schools, 45% of the corn harvest, and 65% of the bean harvest. As a % of GDP affected, these 2 storms caused more damage than the largest 20 storms in the US combined.

3.5 million people in these countries face food insecurity, primarily due to the changing climate. It’s no wonder folks need to leave.

Here is a touching video that shows what is happening in the Northern Triangle:

An Issue of Inequality

The twisted irony of all this is that most of the climate damage causing these droughts and disasters are from wealthy nations like the US, Europe, and China.

We have been adding so much greenhouse gases for so long in the name of capitalism and economic growth yet we do not want to be at all responsible for the damage that causes others.

According to climate-refugees.com, since 2017 60% of migrants are from natural disasters, and in the last 6 months that total is 80%!

The World Bank estimates that by 2050, in Latin America, Sub-Sahara Africa, and Southeast Asia, we will have 143 million more migrants primarily from climate change.

As another example, people often see the Arab Spring as the springboard for the crisis in Syria, but there was also a 5 year drought in northeast Syria that left 1.5M people famished and in turmoil.

The Climate Crisis is a humanitarian crisis. And it’s negatively hurting the marginalized people in the world the most. We here in the US don’t bear all the responsibility for that, but we certainly bear a lions share, and it’s only right we not only try to support migrants in an orderly fashion, that we provide relief funding to these neighboring nations, and that we make more aggressive moves to curb our own contributions in greenhouse gases as fast as we can. From the fall of 1994 to the winter of 1995, scientists observed a strange event around Lake DeGray in Arkansas in which thousands of birds were found dead under mysterious circumstances. The birds, including over 100 eagles, seemed untouched from the outside with no apparent injuries. On the inside, however, these birds showed lesions on their brains and spinal cords, a condition coined avian vacuolar myelinopathy (AVM). This obviously really puzzled researchers, and while the Department of Fish and WIldlife searched for the disease or toxin that was responsible, they came up empty handed.

A Killer on the Loose

A few years later near lakes across the south, an almost identical phenomenon started happening- birds dying by the masses at the hands of a mysterious killer. In addition to eagles, Canada geese, coots and Mallard ducks were all victims.

Signs of mass illness or death amongst species at the top of the food change is often a red flag to scientists, signaling potential health threats to the environment. So researchers knew that finding the culprit was important to ecology and time-sensitive.

This week, scientists are rejoicing as the mysterious killer was finally identified via the teamwork of researchers in Germany, the Czech Republic, and the United States. The team began collecting data in 2001 at a site of one of these mass deaths: Lake J. Strom Thurmond, a man-made reservoir on the Georgia-South Carolina border. The culprit they found, you ask? A neurotoxin called aetokthonotoxin, produced when a cyanobacteria comes into contact with bromide, a harsh chemical element that is highly reactive and usually not just out and about in nature. So what is cyanobacteria, and why was bromide near the lake to begin with?

The Birds, the Bees, and… Bacteria?

Cyanobacteria, also known as blue-green algae, is a phylum of bacteria that obtain energy via photosynthesis and are infamously responsible for creating the toxic blooms that poison lakes and seafood. At Lake Thurmond, this bacteria was found by the team and studied growing on an invasive plant called hydrilla.

Hydrilla is extremely easy to grow, however it does not actually belong in many of the waters it is found in today. Since hydrilla is a popular plant for fish tanks, the story goes that in the 1950s someone dumped their aquarium into a Florida waterway. The rest is history, as it has now become one of the most invasive and fast growing species of aquatic weeds across the country, from Washington to the Carolinas. Y I K E S. And no matter what herbicidal or extermination strategies have been tested to try and eradicate it, nothing has worked.

As for the bromide, the researches are still not sure where this element is coming from. Is it naturally occurring, or is it coming from man-made sources like coal-fired power plants and other run-off sources? Could it be derived from some of the herbicides used to attempt to kill off the hydrilla?

When the toxin was discovered on the hydrilla, the theory became that when herbivorous birds swimming in the lake eat the plant, they become catatonic and easy prey for the bald eagles. The eagles then ingest the the toxin themselves while feeding, and die shortly after. Scientists are highly concerned about the potential for this neurotoxin to affect humans who eat infected fowl as well. All these questions still need to be answered, and while this discovery is a huge success the work is not quite done. In a way this new information highlights even more research and work needed to be done around controlling the outbreaks and the potential man-made elements that are contributing to their severity.

One thing that we can all do, is not dumping out any aquarium contents (or really anything) into our bodies of water. That seems obvious, but in this case this simple action could have prevented so much harm.

Regardless, huge congrats to the team who worked tirelessly to solve this mystery! You can read the full story here.