Cannabis Isn’t So Green After All

Cannabis is surging, and rightfully so. It’s a great remedy to stress & anxiety, far safer and healthier for recreational use compared to alcohol, and it’s legalization is one of the few issues both political parties tend to agree on.

However, until a study was just published by Colorado State University, nobody has looked into the carbon footprint of our favorite flower. It is a flower after all, so why would there be an issue?

The results of this study are highly concerning. They found that current methods for cultivating cannabis across the US results in a Greenhouse Gas Emissions (GHG) using life-cycle assessment methodology of 2,283 to 5,184 kg CO2-equivalent per kg of dried flower. The range depending on the location.

Here is the full and complete study if you’d like to review.

What does that mean exactly? It’s not good. Compare that to common fruits and vegetables where a 2014 UK study of apples, cherries, strawberries, garlic and peas found that for imported products the GHG was 10.16 kg CO2/kg and for locally produced it was just 0.5 kg CO2/kg.

That’s a massive difference. How about comparing this to Beef? Beef sits on average at 36 kg CO2/kg, although beef has the added issue of methane release which is even more harmful than carbon.

Why is Cannabis so Environmentally Unfriendly?

The issue here lies in the indoor cultivation facilities that dominate the industry in order to maximize output to meet demand.

They use a massive amount of electricity to feed their heating, ventilation and air conditioning systems. That electricity is relatively cheap compared to price they are able to sell cannabis, thus making this work economically. However as we’ve often discussed before on Animalia, that’s only because we are not factoring in the true and complete costs of the way we do business – in this case the environmental cost of electricity which is derived from fossil fuels and natural gas.

Things get a little better with growing cannabis in greenhouses – 326.6 kg CO2/kg and even better when grown outdoors which produces just 22.7 kg CO2/kg.

We are definitely not. We disapprove of cancel culture and we are pro cannabis.

However we also need to be honest with ourselves about what we are producing, how we are doing it, and the impact it’s having. It is far easier to address these issues when an industry is still in it’s early stages like cannabis, vs. later when it is at massive scale.

So here’s hoping the industry can find a way to meet demand with outdoor cultivation while also maintaining proper levels of biodiversity and soil regeneration. This means cannabis likely needs to be grown alongside compatible plants. According to this research here, cannabis grows well with sunflowers, alfalfa, lavender, coriander, basil, dill and more 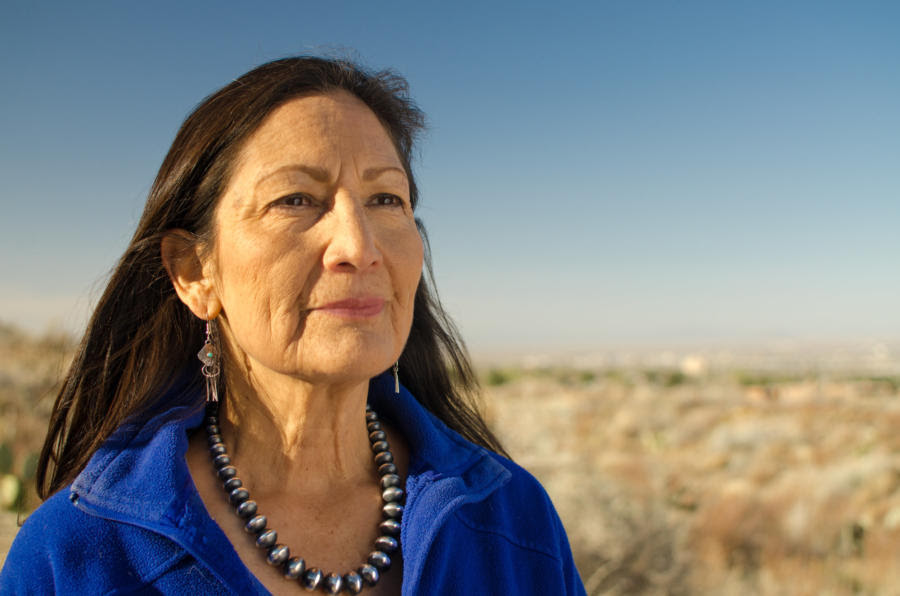 Rumors on the Hill Split on Deb Haaland Confirmation

If you don’t already know the name, Deb Haaland is Joe Biden’s nominee to lead the Secretary of the Interior. Her nomination is a historic and pivotal one.

If confirmed, she would be the first Native American ever in a Cabinet role- very cool and long overdue. She already has broken ground as being one of the first 2 Native American women ever in Congress when she was elected in 2018 in her home state of New Mexico.

Beyond the important signal this sends in putting Native American leaders in critical governance roles where they belong, there is a lot more at stake here. You see, the Department of the Interior oversees over 500 million acres of public lands, which not only includes critical national parks and endangered species habitats, but a vast array of potential oil and natural gas sites.

As Senator Maria Cantwell of Washington put it in her confirmation hearing late February, “I almost feel like your nomination is sort of this proxy fight over the future of fossil fuels.”

Hence the divide. The future of the fossil fuel industry is becoming perhaps the most divisive and combative issue in Biden’s early tenure, and Deb Haaland if confirmed would have a big say in that outcome. Her confirmation is one of the few remaining Cabinet nominees that are bit of a toss up at the moment. We are of course pulling for Deb, and there is some momentum building from even the more moderate Democrats who are not in the Green New Deal camp, such as Joe Manchin III who said following her hearings he would vote her in.

Lack of Native American Representation is a Major Problem

The enduring lack of Native American representation in government has long been a problem. Of the 7 largest conservation organizations in the US, across their 200 board members, only 5 represent tribal communities. Yet, 99% of public lands lie west of the Mississippi, and a large portion of these lands
It’s easy to argue that all of us would benefit from indigenous leadership particularly in areas such as conservation, natural resources, and land management. They have been on these lands for thousands of years. Time and time again, they have showed their prowess in land stewardship. Want some examples?

The point being, we can learn a lot from Native American cultures and would all benefit from putting Indigenous leaders in senior positions of governance.

In her confirmation hearings Deb did not commit to an end of fossil fuels, despite what right-wing media might tell you. She even went so far as saying that fossil fuels will be a critical part of our energy system for the foreseeable future. Like Biden and others on the left, she is not advocating an abrupt end to all drilling, but rather, minimizing any new drilling sites going forward to focus on shifting our energy towards renewables going forward. Recognizing however this will be a long and arduous road ahead. The only way to get there however, is to start now, and be bold in doing so.

She also acknowledged that many BIPOC jobs exist in the world of fossil fuels today, another reason for a thoughtful transition to renewables. We already wrote here on Animalia that we were pleased with Biden’s executive order to shut down the Keystone Pipeline project but not pleased with lacking any clear plan to offer coverage of lost wages and retraining for those who had their jobs displaced.

As it stands, we predict Deb Haaland will get confirmed. And her confirmation would be a historic moment on many fronts and inspire millions of Indigenous people in this country.

We encourage you to check out Deb’s opening statement in her confirmation hearing: 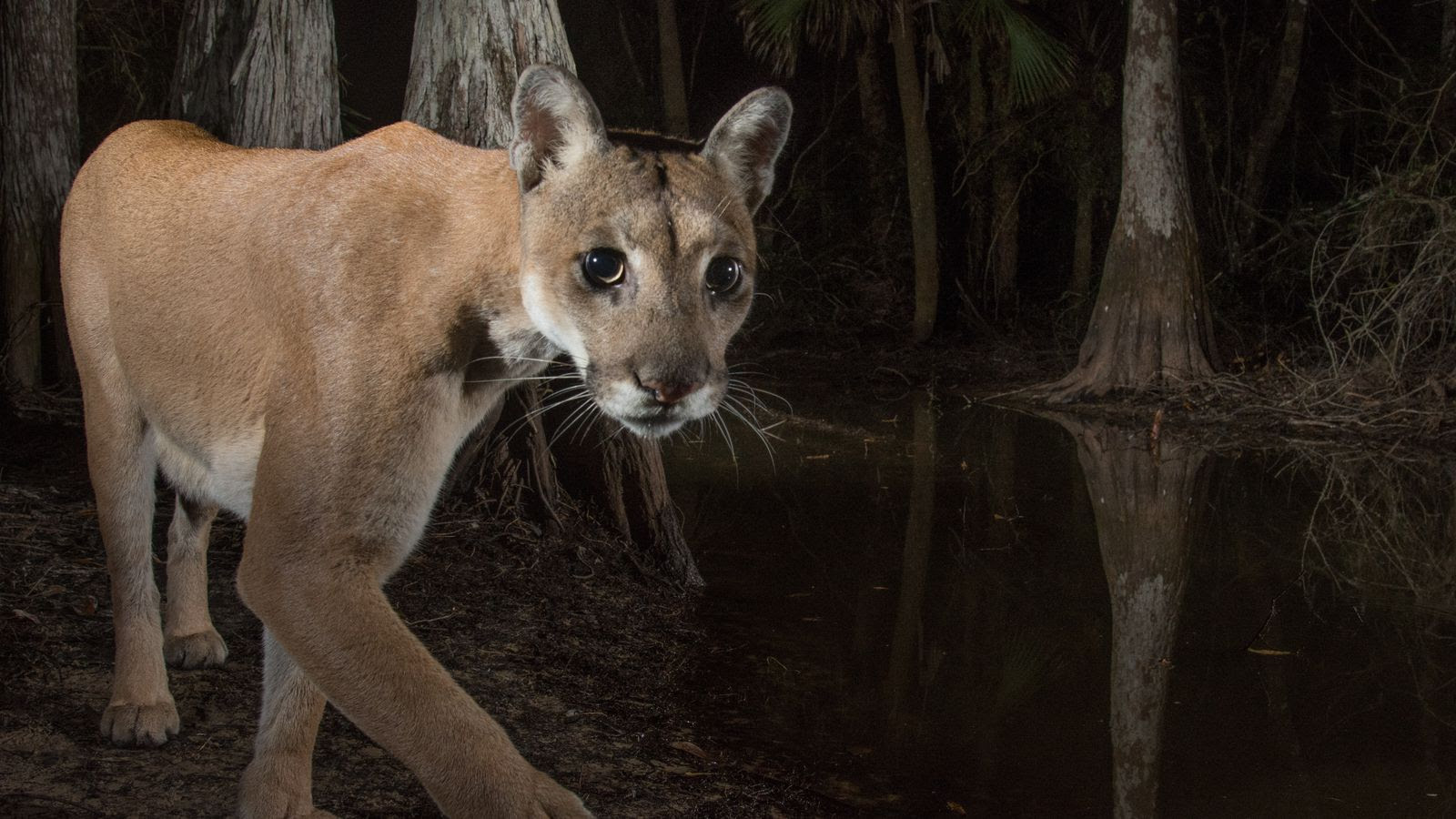 The Florida panther may have a newfound friend in Florida ranchers, an odd couple to say the least considering historically ranchers have wanted to minimize panthers due to their attacks on livestock, particularly calves. Of course, as seems always the case with ranchers vs. predators, there is not data to prove this has ever been a major problem, just occasional kills here and there that ranchers can get reimbursed for…..but we digress. Lets focus on the good stuff!

So why the new kinship?

Florida’s population is growing like crazy. Right now nearly 1,000 people are moving to Florida EVERY DAY. With this comes more development. With development comes the tear down of open land. Land critical to the panther & the rancher.

What is a Florida Panther exactly?

Some might tell you it’s an NHL hockey team, albeit not a very good one.

The panther is actually a subspecies of the mountain lion, our cougar, that roams across the United States. Today they stand as a conservation miracle, even though still threatened, as they almost went extinct. By the early 90s there were only 30 panthers left. At these low numbers, the threat of inbreeding was larger than loss of habitat or hunting.

So a mountain lion tracker from Texas brought in 5 cougars from his state to mate and ensure genetic diversity. Fast forward today and there are roughly 200 panthers, all primarily living in the Southwest nook of Florida, between Fort Myers and the Everglades. However threats remain. Each year at least 25 panthers are killed from getting hit by cars and trucks – their largest cause of death. And a new neurological disease is ravaging the panther and bobcat community, making it hard for panthers to walk and balance, which then makes hunting impossible. Scientists still don’t know if this is from a pathogen or toxin.

Still, there is hope, and it might be with the rancher….

The wildlife corridor is a patchwork of public and private lands that are designed to be protected for both wildlife and ranchers. They both depend on it as their last beacon to preserve more land from being developed.
The corridor has allowed panthers to start to migrate north, which will be critical to their survival long term. Panthers need roughly 200 square miles of territory to hunt. As populations hopefully continue to grow, they will need to expand up the corridor into Georgia.

The ranchers also want to preserve this corridor. And they realize the panthers are the perfect allies in doing so. As bringing conservation and rancher funding and agendas together to combat developers gives them a fighting chance. Hundreds of other species also depend on this corridor, making them big supporters of panthers and ranchers as well.

This is going to serve a very interesting case study to see if ranchers and predators – long arch rivals for land control – can work together and realize they may need to in order to stave off real estate development that is an attack on them both. Ranchers will need to tolerate some livestock deaths in the process, and the government will need to step up its reimbursement programs.

If this partnership bears fruit, it could change the entire face of predator protection in the US.