By Annelise TappeApril 11, 2022No Comments

Lake Chad was once the largest lake in the world. In 4000 B.C, it covered 150,000 square miles. That’s a big lake! In recent years, the surface water of the lake has been fluctuating between 700 and 2500 square miles, yet still some 40 million or so people depend on Lake Chad and the surrounding Lake Chad Basin for survival. This has created a lot of instability and tension in the region. It has become a lightning rod topic in the intersection of climate and social justice and an example of the water shortages and food insecurity that come with collapsing ecosystems.

Yet, how much of the Lake’s changes are due to climate vs. other factors? Is it on pace to truly dry up or not? And what are the right solutions to addressing the environmental and social needs of this ecosystem? There are a lot of opinions out there to these questions and what happens to the Lake Chad Basin in the decades ahead will be very symbolic of how we address ecosystem changes in the most marginalized regions of the world. It will also be a testament, either through success or failure, of the importance in investing in adaptation efforts, not just mitigation.

What’s happening in the Lake Chad Basin is happening all over the world. Ecosystem collapses due to climate change, biodiversity loss, and human development are leading to conflict and displacement all over the world. And it’s coming within the US as well especially if global warming rises above 1.5C. So it’s important we improve how we are collectively approaching these issues across the world so we are prepared to do the same when it hits close to home. 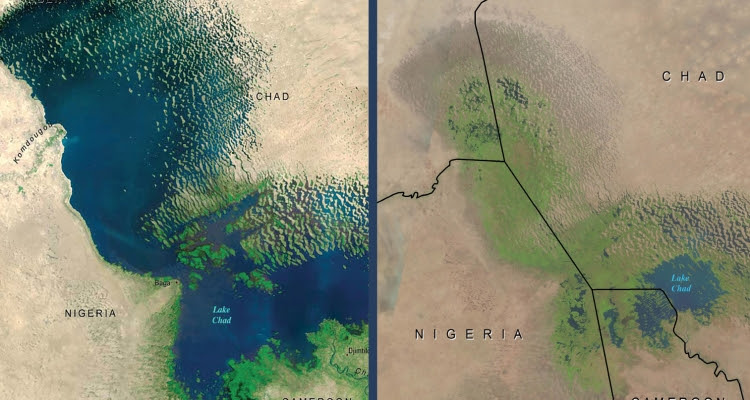 Compared to those 4,000 BC levels, Lake Chad is quite a bit smaller. But of course every ecosystem has changed with the growth of human development so we really need to focus on more recent history in order to gauge the prospects of the Lake Chad Basin.

A popular statistic out there is that Lake Chad has been reduced by 90%, again in terms of surface water area, compared to 60 years ago due to climate change and irrigation and is on the brink of total collapse. That’s scary, because again, over 40 million people rely on the surrounding basin that Lake Chad feeds.

If we unpack that a little, the majority of this decline came in the 60s and 70s when this region went through a historic drought. It’s been somewhat stable since the 80s. The northern part of the lake has shrunk a bit more but the southern part, which connects to the lake’s primary tributary the Chari River and feeds most of the water in the northern part, has been fairly stable.

That’s not to say we don’t have a problem. Global warming is creating more erratic weather and rainfall. Temperatures in the region are up 2C compared to the 1960s. And there are a lot more dams built on the tributaries that feed it being used for large scale farming. The result is a big spike in instability and a big drop in resilience. So even though Lake Chad has been somewhat stable the last few decades, it has been fluctuating a lot more during that time, and is much more susceptible to drought conditions if and when they take hold again for a prolonged period.

The reasons for fluctuations cause instability is fierce competition over resources when they are there. Insurgent groups such as Boko Haram have been feeding into this instability. When resources are scarce or inconsistent, conflict ensues. Today 1 in 2 people in the Lake Chad Basin are in need of humanitarian aid to survive.

Those fluctuations also impact other species as well. The Kuri cattle are endemic to the region. You can’t mistake them with their trademark horns. They remind me of the faun in Pan’s Labyrinth. They help keep vegetation in balance via their grazing, which is also important for the lake. Too much or too little can lead to wider changes. The Kuri’s migration patterns have been thrown into flux and they are on the brink of extinction, which would further destabilize the basin.

As for irrigation work to feed farmlands, this is ok in principle and in balance, but there is not enough governance over these systems. Furthermore, much of the irrigation is going to larger industrialized farms growing food for export financed by international Western financiers, oftentimes using fertilizers and herbicides to accelerate growth which produces toxic runoff in the Basin and thus even more problems for the ecosystem without any immediate economic or health benefit for local communities. A report from The Oakland Institute was published last week chronicling how this is happening across Africa leading to even more water and food insecurity while damaging the environment.

Finally, the region is heavily reliant on rainfall in order to keep Lake Chad alive. Historically, there is more rain in this particular region when temperatures are hotter. Great news. However, recent modeling shows that the increased temperature of the North Atlantic Ocean coming from the melting of Greenland is actually reducing the rainfall in the Sahel region over the next few decades.

Ok so there is clearly a problem here, leading to warships and displacements of local communities and collapse of critical species. So what should we do about it?

THE TRANSAQUA CANAL – A SOLUTION OR ANOTHER PROBLEM?

One of the most talked about solutions is building a massive canal from the River Congo to Lake Chad to transport some 100 billion cubic meters of water per year. The project would span 12 countries and cost upwards of $50 billion to create. This has been approved by many parties involved and is not too far from the finish line in moving forward. But…..should we do it?

This is where one needs to dig beneath the statistic of the 90% shrink in the last 60 years, which sounds like it is nearing extinction. And this is the problem with even some of those on the very pro climate side. They assume global warming alone is drying out Lake Chad and new water supply must be urgently brought in before it’s gone.

For one, because Lake Chad is stable, there is no immediate threat of it totally withering away without new water supply. This simply may not be needed. For another, diverting the River Congo brings with it severe risks to other ecosystems and creating newfound water crises along the canal as protected water supply for the Lake Chad Basin. And with that, more conflict and human death.

Instead, this is where we need to really double down on investing in Adaptation & Resilience. The most underfunded aspect of global capital allocation to fight the climate crisis. These include things such as:

This is where we should point our funding over a very risky, very expensive canal from the River Congo. Look, if the experts on the ground, which we are not, ultimately deep such a project necessary and it’s supported by the scientific community, well of course it needs to be done. But even in that cast, the adaptation and resilience tasks still need to be carried out. 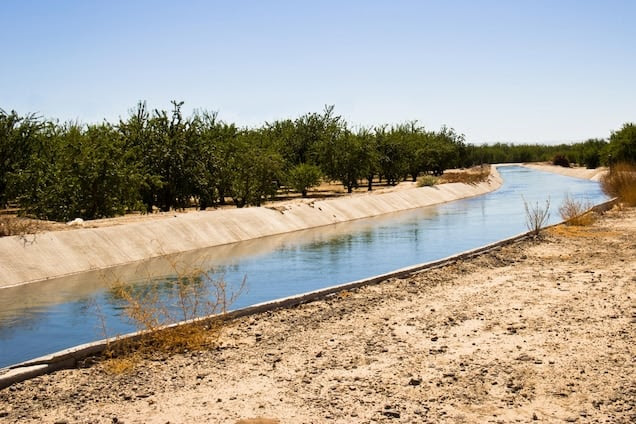 This probably deserves a deeper write up on our end, cause it’s that important, but this story details a potentially powerful, and very natural solution to California’s water shortages. The gist of it is allowing fields to flood during winter rainfalls (particularly in Northern California) and then channeling them into targeted groundwater zones where there is sand & gravel rather than clay (which stops water movement) so it can be returned to the underground aquifers and available for use in the dry season. California has done a lot to try and capture some of the winter snowpack melt for example into its above ground canals, but a lot of rainwater flows to the sea, in order to avoid flooding the farmlands. As a reminder, 40% of all produce grown in the US is grown in California. With winters getting wetter and summers longer and hotter and dryer, we need to redesign the water system in California. This would essentially be returning the region to how it was designed by nature and how it operated before all the human development of the West.

THE SHIP THAT WILL REVOLUTIONIZE THE WORLD

Aside from just looking really cool, this type of innovation with cargo ships is much needed. These ships produce about 1 billion tonnes of carbon emissions per year, roughly 2.5-3% of global emissions overall. The industry has been working on shifting to biofuels vs. fossil fuels to help lower that, but those biofuels require a lot of industrialized agriculture which is leading to biodiversity collapse. We don’t want to be solving one problem (fossil fuels) by creating another one (more large scale, mono agriculture). This ship essentially is a modern take on a sailboat. It’s not quite as fast as a diesel powered engine, a trip across the Pacific that would take a current ship ~8 days might take 12 days with the Oceanbird, but it produces 90% less emissions over that time. Well worth the additional 4 days.

Beavers are back in London, some 400 years after their eradication. This is part of a 2-decade long project from the UK to reintroduce beavers back into the wild following their extinction in the region primarily due to the fur trade. This is a big deal. As a reminder, beavers are examples of what we call Ecosystem Engineers. Beavers are essential to the health and sustainability of our water systems as their dams help increase overall surface area and create more resiliency by turning say 1 body of water into 5 different ones. This also means improved water security for us, humans. Go beavers.

This is a few months old but something we want to bring attention to. One of the few bipartisan agreements when it comes to addressing climate is getting back to being a global superpower when it comes to manufacturing solar, with bipartisan support for a $300B mostly tax incentives to manufacture solar here in the US. Today over 80% of the world’s solar panels are manufactured in China. They have a price advantage because the Chinese government has been subsidizing this heavily since 2010 and due to their low cost of labor. In order for the US to be price comparable, we need those same government subsidies. The world is learning a harsh lesson right now when its energy sources are too dependent on totalitarian regimes as is the case with Russian oil and gas. We don’t want to be dependent on China to scale our transition to renewables.