By Annelise TappeOctober 7, 2021No Comments

In some super positive news for the week, we want to highlight some recent work from the Sydney Institute of Marine Sciences & The University of New South Wales for their living sea wall project.

Using 3D modeling to create concrete panels, they have been able to increase biodiversity by 30-40% compared to traditional sea walls. This is a big deal. And it’s not just biodiversity they are boosting, they are also improving water quality and are able to collect more data on the health of marine ecosystems in real time.

In terms of how it works, the 3D panels harbor seaweed, barnacles, and even shellfish. Due the to the cascade effect we see in the natural world with species revival, these species then invite fish and algae into the area. And while it’s not quite a mangrove or kelp forest, these living sea wall ecosystems are really promising and important, because sea walls themselves are only going to increase in the years ahead. THE DAWN OF SEA WALLS EVERYWHERE

We already have seawalls scattered across major cities around the world. You’ve seen them before. Large, concrete slabs that extend down into the water, cutting off traditional shorelines but providing protection against rising sea levels, recreation space, and energy generation.

With oceans warming, the Arctic melting and tropical storms increasing in intensity due to climate change, sea walls are going to be more and more commonplace. They stand to be bigger and longer to prevent flooding in particular.

In fact, here in the US, cities ranging from Boston to Philadelphia to D.C. to Charleston to Savannah and Miami are projected to experience 100 days of flooding annually by 2045 if ocean warming and weather patterns continue as is today. That’s bad, really bad. Thus necessitating massive seawall projects. From an 8-mile, $2B project in Charleston to a 1-mile, $4.6B project in Miami.

Nothing but sunshine and smiles here. This is the type of innovation we need. It’s an example of both climate adaptation – preparing our cities to withstand climate changes, and climate mitigation – providing a solution for marine ecosystems to slow down the loss of critical biodiversity.

Remember, the natural ecosystems that sequester more carbon than any technology we could ever event – we are talking oceans, soil, terrestrial forests, etc.. – are kept strong through the diversity of life they house that are all interconnected. Protecting biodiversity is protecting this planet, including us.

Big thanks to the team behind this. You can go support their work here! 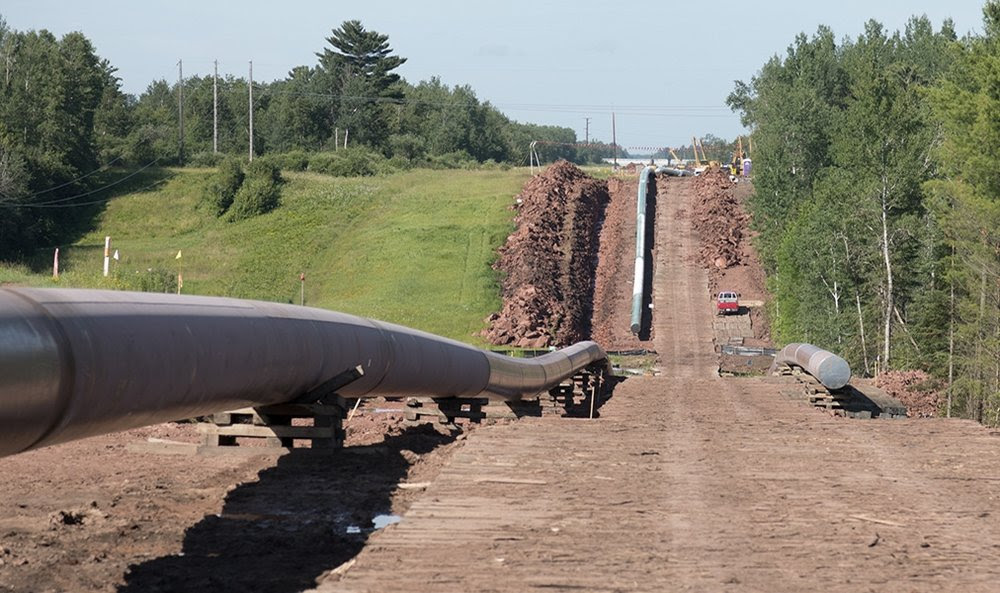 In late June of this year, the Biden Administration decided not to step in and stop a major new oil pipeline being built across Northern Minnesota despite tens of thousands of petition signatures and pleas from environmental, indigenous, and social justice groups pleading for it to be shut down.

Despite the early wins for Biden such as stopping the Keystone XL Pipeline and staffing Environmental Justice roles across his administration, folks like those at Stop the Money Pipeline, a coalition fighting the big money that flows into new fossil fuel projects, are getting understandably frustrated and feeling Biden may have been talking a bigger game than he’s shown to act on.

We are seeing this play out as well in the turmoil within the Democratic Party over the Build Back Better Plan, with more moderate Democrats wanting to reel it in and the more progressive wanting even more. Biden campaigned as a moderate, but made promises on the environmental front as a progressive, and perhaps may be feeling more conservative these days after his blunders on Afghanistan and the Border, feeling the need to keep the moderate base for the party.

Quite the conundrum. But one thing is very clear to us – nothing is more important long term than getting off fossil fuels.

Watch this video from one of the protests.

THE LOW DOWN ON LINE 3

If you remember from our podcast episode The Bad Ass Woman from Bad River – we learned about Canadian energy company Enbridge and their rather aggressive tactics in violating Indigenous treaty rights and environmental protection standards to expand their pipelines. If you didn’t catch that one, don’t worry, it’s linked below this article!

Line 3 has been carrying oil from Alberta Canada to Wisconsin for years, passing through Northern Minnesota and lands of the Ojibwe native communities. Well old Line 3 has run it’s course, and is at too much risk of leakage and corrosion – and we saw this week the problem of old, poorly maintained pipelines when 126,000 gallons of crude oil spilled off the coast of Southern California.

So now Enbridge is building a new one. Only much, much bigger. It started construction in Minnesota, that part that was delayed the longest due to protests doing their damnedest to stop it, and is now over 60% complete. Here is a great film about Native resistance to this project we encourage you to check out.

This pipeline, to put it simply, sucks. Here are some reason why:

Oh and as for the risk of a spill….Enbridge has had over 800 spills in the last 15 years. Yikes. including the largest inland oil spill in US History (see video here). Hard to trust a company like that eh?

As if that wasn’t bad enough, Enbridge has set up an agreement with local police to provide $2.4M in funding to reimburse expenses for arresting protesters.  Awful. 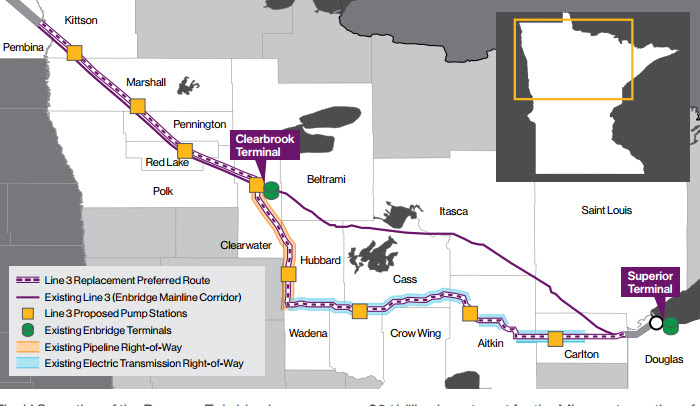 Biden should be applauded for speaking a bigger game on environmental issues than any other US President ever, bar none. As well as meaningful actions he has executed, such as stopping the Keystone XL Pipeline, or is pushing for, such as billions of climate funding across his infrastructure plans.

That said, he’s also dropped the ball on some key issues. Putting zero teeth behind his “soft ask” to stop Diesel engine car production by 2030. Or in this case, deciding not to step in to stop the Line 3 Pipeline which is a terrible decision by all accounts and measures.

It appears the political challenges are impacting Biden’s decision making. He’s been losing moderate Democrats and has had a couple big PR blunders such as how he pulled out of Afghanistan. That puts his party on edge and risk of losing Congress in 2022 and the Presidential office in 2024. As a result, Biden may be letting some fossil fuel projects push forward – such as Line 3 and the Gulf of Mexico one – in hopes of appeasing those who are worried about rising short term energy prices as we transition to renewables. We are just speculating here. Trying to understand the decision making.

However, if Biden starts to lose progressives AND moderates, he’s in trouble. And then we are all in trouble. Because the Trump influenced wing of the Republican Party is waiting in the wings to take the legislative and executive branches over again, in which case we all lose, especially the environment.

That said, there are other ways for Biden to appease moderates without allowing new fossil fuel projects such as Line 3 continue. Line 3 should absolutely, 100% be shut down, but sadly, that doesn’t seem to be happening.

If you want to support the shut down, please go and sign this petition here. Share it to your community and make your voice heard. 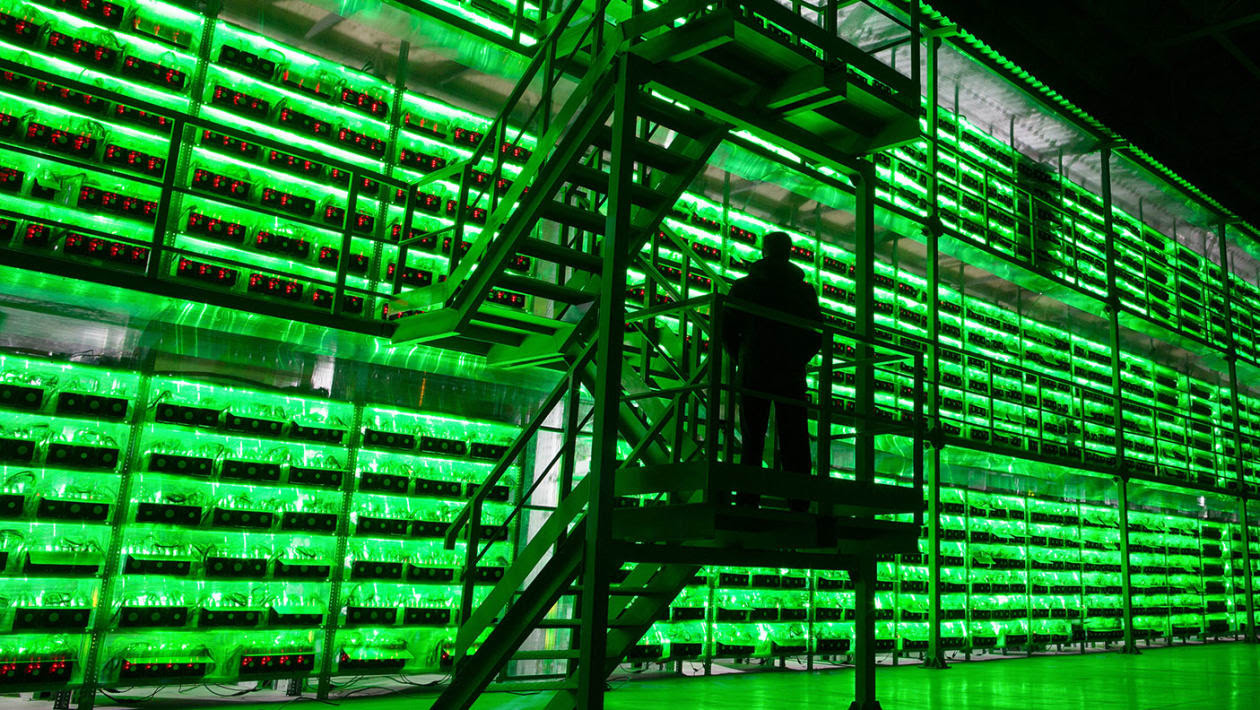 We finally got around to reading up on Square’s white paper and supporting coverage on their vision for how Bitcoin can accelerate the transition to renewable energy.

To get you caught up, cryptocurrencies use a lot of energy in the form of electricity. This is because they rely on a global network of miners that are the backbone of the decentralized network. In particular, Bitcoin uses the most given its both the largest of all cryptos but also because it uses a proof of work model vs. a proof of stake model like Ether. We’ve covered that energy usage before, but essentially as all the millions of computers are competing to solve every hash which is what makes Bitcoin so secure and trustworthy, they are relying on massive amounts of electricity not only to run those computations but also to cool the mining farms these computers live in.

Last year Bitcoin emitted an estimated 23 million tons of carbon, roughly 0.3% of the world’s entire energy usage. Or about the same amount of the entire country of the Czech Republic.

As we mentioned last week, the most important problem to solve in meeting our global emissions standards is decarbonizing our electricity grid. Therefore, cryptocurrencies have come under scrutiny for their electricity usage. It’s not their fault that most of our electricity comes from burning fossil fuels, but can crypto be anything better than a seemingly innocent bystander?

Well, Square thinks it can be.

If you don’t know Square, it’s the payment and financial services platform founded by Jack Dorsey, which he runs in between steering Twitter and escaping to his meditation retreats. It’s also the same company that bought Jay’Z’s floundering music service Tidal, seemingly because of his celebrity crush on the hip-hop mogul. As well as investing a big chunk of their cash into Bitcoin, so this is not coming from an unbiased source.

So here’s the pitch: we know the biggest challenge with wind and solar in particular is less on total volume potential and more on its intermittent nature. Solar is not thriving at night or on a cloudy day, the same for wind on a calm day. Because we don’t yet have cost efficient, utility scale battery storage, the grid can’t easily rely on wind and solar other than prioritizing it when it’s firing, but always needing fossil fuels when they are not. Another problem is location. Since most solar and wind farms are set up in large scale rural areas away from peak demand, that energy has to travel quite a bit to the end consumer, making it expensive to get those farms off the ground given the additional work to trigger demand.

This combo has led to grid congestion in rural areas where in peak hours, solar and wind are humming but there is not enough local demand. There is an estimated 200+ Gigawatts of delayed solar and wind capacity.

The idea is to build crypto mining farms in those same rural areas to utilize and help store renewable electricity. The theory being this would:

Today there is 10-20 GW of mining capacity in the world, so the delayed capacity from grid congestion alone would be more than enough.

The big promise….At a constant cost of electricity, this white paper claims that Bitcoin Mining could enable Renewables to meet 99% of electricity demand vs. ~40% they account for today. Bold Claim! 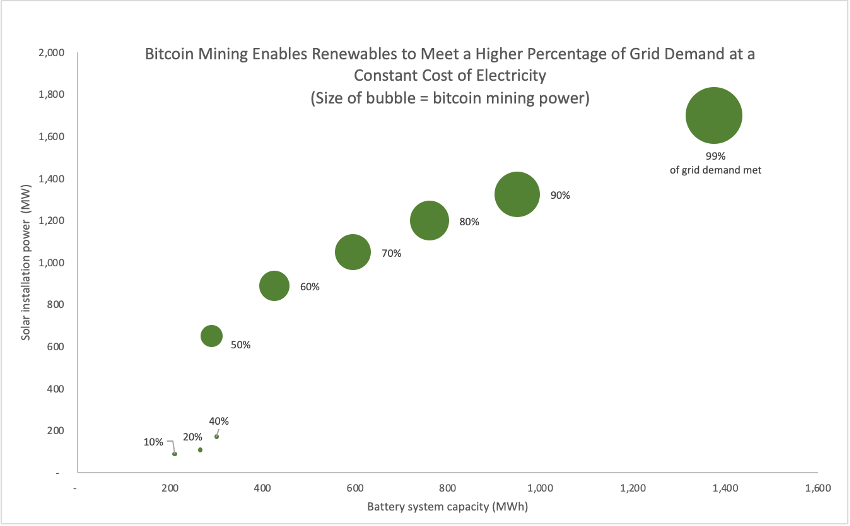 There is logic here for sure. Plenty of challenges still to solve and things to account for. Their model doesn’t speak to any impacts on profitability of renewables. Not battery capacity degradation. Or how more solar may affect electricity prices.

Nor does it speak to future advances in smaller, more efficient solar and wind farms that don’t require as much land usage. Or the ability to utilize nuclear advancements for contributing clean electricity. Nor the need to lower emissions of mining facilities through aspects such as their cooling systems.

All that said, bitcoin is not going anywhere. We think it’s at worst a long term, default unit of financial storage that will replace Gold and at best, an actual currency. So if we can find a way to utilize it to accelerate renewable growth, we’re all for it.